We take a look at the latest news on British Cycling's "Keep Racing on the Roads" campaign. 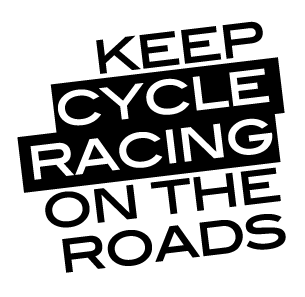 In direct response to British Cycling and its members’ campaign to Keep Racing on the Road, the Department for Transport (DfT) has agreed that the outdated 1960 Regulations can be redrafted. This is a welcome move but DfT has first asked that we reach an agreed position with the Association of Chief Police Officers (ACPO) before redrafting can proceed. ACPO is now consulting all 44 police forces and they hope to receive responses by mid October 2012. We will keep in regular touch with ACPO and will update this page with any developments.

We are continuing to pilot the signage scheme that gives marshals the ability to hold traffic at junctions during cycle races. An additional six road race events have piloted the scheme across Thames Valley and Bedfordshire so far in 2012, along with 18 events in Essex last year.

Transport Minister Norman Baker has written to Chief Constables to ask more local authorities and police forces to consider using the sign to promote competitive road race events in their areas. ACPO’s Cycle Lead has also written to police forces instructing that usage of the sign should be considered as a tactical option.

We will continue to engage with authorities to roll out the scheme more widely in 2013.

We are in discussion with key stakeholders including the Department for the Environment, Food and Rural Affairs, the Rights of Way Review Committee and the British Equestrian Federation. We hope to have an update on this soon.