British Cycling and the CTC have welcomed Transport Minister Norman Baker’s announcement of an extra £20 million funding for cycling infrastructure in cities, towns and villages throughout the UK. 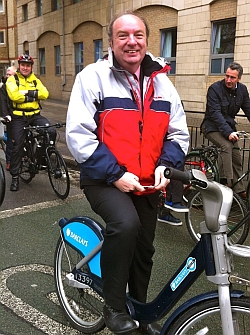 Baker announced the extra funding at a “People-friendly cities for health & well-being” Active Travel Conference in Leicester, at which British Cycling is speaking about “Delivering a Cycling Revolution”. The new money joins £30 million of funding for similar projects announced earlier in the year, which was augmented by a further £15 million of match funding from local sources. The new funding will be used for a wide range of infrastructure improvements including better cycle facilities at railway stations, improved cycle links and cycle friendly road junctions. The projects to be funded will be announced later in the year.

In a joint statement with the CTC, British Cycling said:

“British Cycling and CTC welcome the announcement of much-needed investment in cycling - it is encouraging to see funding being allocated to improve conditions on the road. We now need to see real leadership right across government to get Britain cycling. If cycling is put at the heart of transport policy - so that all decisions are made with cycling in mind - we can create a cycling nation to rival countries like Denmark.”

The additional funding comes on the same day that the National Institute for Health and Clinical Excellence (NICE) published guidance calling on councils, businesses and schools to promote cycling and walking.

“Cycling is great for your health, the economy, and for the environment so we are determined to make it easier for people to cycle whether for leisure, getting to the shops or as part of their commute to work.

Following the success of the Olympics, there is a huge appetite for more cycling provision from the travelling public and we need to capitalise on this enthusiasm at local and national level.

That is why we are investing £20 million in cycling infrastructure and getting councils to bring an end to silo working in their offices.”

“Being active helps us stay healthy and protects against life threatening conditions such as heart disease, type 2 diabetes and certain types of cancer.

Cycling is a great way for adults to get their recommended 150 minutes of physical activity each week and this funding will help encourage more people to get involved.”