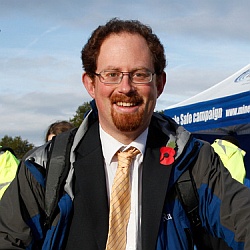 MPs across the three main parties are lining up to sign it in support including Sir Peter Bottomley, Rosie Cooper, John Leech, Don Foster, Michael Gapes and Clive Betts. Others will continue to add their names in support. Following on from the news that Paralympic hand cyclist Rachel Morris was injured whilst training on the road last week, members of the House of Lords, who cannot sign an Early Day Motion, have also contacted British Cycling to offer their support.

"That this House notes that many victims of road accidents do not feel that the criminal justice system adequately protects or supports them in the aftermath of their case; further notes that it is important that those who have suffered traumatic incidents are given effective and sympathetic support as they attempt to rebuild their lives; welcomes the work of British Cycling and other groups including CTC, Sustrans, London Cycling Campaign, The Times, Cycling Weekly, RoadPeace and Brake to raise the profile of the issue and calls upon the Ministry of Justice to review carefully the evidence they have submitted and undertake a comprehensive review of each part of the criminal justice system from crash investigation standards through to sentencing guidelines to ensure it is fairer for cyclists, pedestrians and other road users who are hurt or seriously injured on the country's roads."

Martin Gibbs, Policy and Legal Affairs Director at British Cycling says “The way the justice system operates when someone is hurt on the road badly needs reviewing. The current process often gives out the wrong message about how we as a society value life and the right of people to travel safely. This is an issue for all road users and one the Lord Chancellor should take seriously.”

We will be calling on our members and readers of Cycling Weekly to write to their MPs to support the motion in a few weeks. We will provide you with everything you need to contact your MP on our website.

In the meantime, keep sending us your experiences of cycling on the roads and stories of any collisions or near misses. The more evidence we have the more the government has to pay attention.