Whenever I go to London these days I'm really impressed with not only the number of cyclists I see on the road, but particularly the variety of people who are cycling. You see businessmen commuting into the City or going to meetings on those Barclays hire bikes, couriers and wannabes with their fixies, and all types of people in between on all types of bikes. I've always loved cycling and I love seeing other people enjoy it, whether that's as sport or just a bit of fun or an efficient way of getting around.

What I do worry about is that in the past year we've had more accidents in London than we should have where cyclists have been killed or badly injured. It’s important that we keep things in perspective as it’s a fact that overall cycling is becoming safer as more and more people are riding, but that doesn't help the people involved in accidents and their families and friends. 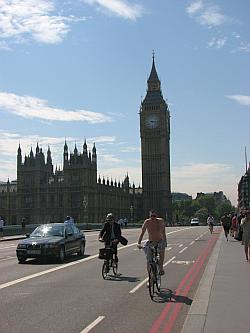 With the general build up of interest in cycling and the effect of London 2012 encouraging more people onto their bikes, we need to do all we can to improve the safety of cyclists, especially those who are less experienced. Most of the serious accidents in London last year involved HGVs so we need to look at the size of lorries that are allowed into the city, the way they are set up for seeing cyclists in terms of mirrors for example, and the way HGV drivers are trained.

There are also clearly some junctions in London that need sorting out to make cyclists less vulnerable. I certainly wouldn't fancy riding across Vauxhall Cross or the Elephant and Castle in rush hour and they are just two examples. If we want more and more people to ride their bikes we can’t have parts of the city where cyclists feel like they are taking a big risk just crossing a junction, it just shouldn’t be that way.

British Cycling recently courted the views of its members (I'm one!), and the thing that most people thought would improve cyclists’ safety was getting more mutual respect between riders and other road users. That's spot on and we shouldn't forget that most riders are also drivers and as more and more people cycle, the chances are that the guy or girl in their car also has a bike.

Lots of good work has been done in London to encourage cycling, but we must keep going so we encourage more and more people on their bikes by creating a safe and respectful environment. It is election time in London so it would be good to hear all of the Mayoral candidates respond to this message and understand how they are going to make life better for the cycling community.