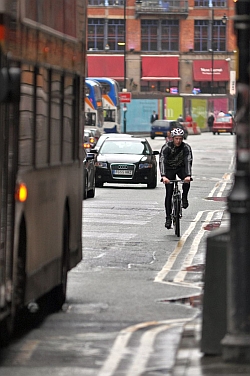 British Cycling and other cycling organisations attended a recent All Party Parliamentary Cycling Group (APPCG) meeting with Under Secretary of State Mike Penning MP, at which a number of cycling safety issues were raised. Chief of these was ongoing concern over the safety impact for cyclists of longer articulated lorries, which are currently on a Government approved trial on Britain’s roads.

Following widespread concerns over HGVs raised in its recent member road safety survey, British Cycling, represented by Policy and Legal Affairs Director Martin Gibbs, raised deep concerns around the fact that a 10 year trial of longer, high volume lorries (which began this month) had been approved by Government without adequate research into safety implications for cyclists.

In October 2010 the DfT commissioned a Transport Research Laboratory report on the likely effects of permitting longer lorries in the UK and a subsequent consultation document was published in March 2011. However both of them fail to address the implications on cyclist safety caused by the trialling of these longer lorries with a maximum trailer length of 15.65 metres and a maximum overall length of 18.55 metres. Instead the report and consultation document both focus heavily on the potential economic benefits of longer, high volume lorries and technical issues around the operation of these larger vehicles.

The safety concerns that British Cycling and other organisations have include the decreased low speed manoeuvrability of longer lorries (that may be up to two metres longer than the currently permissible maximum size); their longer wheelbase effectively producing greater low-speed off-tracking or ‘cut-in’. This means that when turning at junctions, the trailer wheels of a longer lorry will follow a tighter arc than the tractor unit, which is potentially very dangerous for cyclists on the inside of that arc. Longer lorries may also cause greater turbulence and stress effects when overtaking cyclists.

Recent figures from Transport for London reveal that eight out of the 16 cyclist deaths in Greater London in 2011 resulted from incidents involving lorries, despite these vehicles only making up 5% of traffic on London’s roads.

At the APPCG meeting, British Cycling asked if the minister was sure that cyclist safety had been properly considered before approving the trial. Penning insisted that it had but after further discussion and when pressed by British Cycling and Roger Geffen of the CTC on whether or not cycling safety had been considered specifically in the work commissioned by the DfT, the Under Secretary of State for Transport admitted; “Not to my knowledge.”

British Cycling has subsequently written to Mike Penning asking that the Department for Transport urgently commission proper research into the safety implications of longer lorries on cyclists. You can read the letter here.

British Cycling will keep members informed on the Under Secretary of State for Transport’s response.