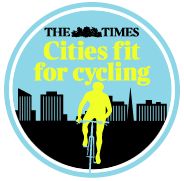 The Times’ award-winning Cities fit for Cycling Campaign has been tremendously powerful and British Cycling has been very pleased to be involved with it from the beginning. Started in response to a terrible incident involving a truck from which Times employee Mary Bowers has still not recovered, the campaign has shown the power that a national newspaper has to make decision makers take notice.

A large part of the effectiveness of the campaign comes from the thoughtfulness with which the Times approached it. They carefully researched the issues, speaking to us and other organisations including CTC and Sustrans as they put together a very sensible and comprehensive manifesto.

After several months of preparation the campaign was launched in February 2012 and British Cycling athletes were delighted to be involved. Nicole Cooke, Chris Boardman and many other elite athletes gave momentum to the campaign from the start, writing open letters in support. 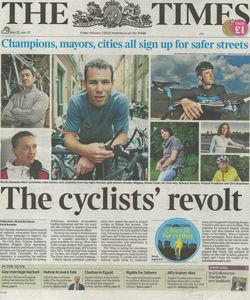 Nicole wrote, “It’s important that we keep things in perspective because, overall, cycling is becoming safer, but that doesn’t help the people involved in accidents and their families and friends.”

She continued "With the general build-up of interest in cycling and the effect of London 2012 encouraging more people on to their bikes, we need to do all we can to improve the safety of cyclists, especially those who are less experienced" Read Nicole's letter in full on The Times website.

Nicole was joined by Sir Chris Hoy, Victoria Pendleton, Bradley Wiggins, Chris Boardman and Rebecca Romero all voicing their support for the campaign..

Since then, British Cycling has continued to support the campaign, with Mark Cavendish and Laura Trott also writing articles in support of the campaign.

The Times campaign has been excellent at articulating the individual policy issues and also the need for political leadership so that cycling is brought into the centre of policy making rather than as an add-on. As Kaya Burgess, the Times journalist has said we must “write into planning law something that says if you are building a new section of road, a new junction, a new flyover, a new traffic light array, whatever, you have to consider how a cyclist is going to navigate [it] in a safe way”

The Times’ campaign was part of the momentum that led to the Westminster Cycling Hall debate, attended by almost 80 MPs and there is no doubt that it has raised the profile of cycling issues at the highest levels, with the Prime Minister saying he strongly supports it. It is the responsibility of us all to keep the pressure on so that these words of support are transformed into action.

How You Can Get Involved

The Times is doing a great job in raising the important issues via their Cities Fit for Cycling campaign. Support the campaign and British Cycling’s work with the campaign by responding to their short survey. Every extra voice on there counts!