The Olympic BMX competition begins on Wednesday 8 August with the men’s and women’s seedings and concludes on the Friday with the semi-finals and finals.

You can find out more about the competition format here.

London 2012 represents a second Olympic Games for Phillips, having exited at the quarter-finals in Beijing aged just 19, but he comes into the Olympic Park with plenty of reasons to be optimistic.

At the 2012 UCI BMX Championships in Birmingham he finished second in the time-trial competition, a career best, before a crushing fall in the first heat of the motos the following day ended his hopes of a medal and left his Olympics in doubt as he broke his collarbone. A speedy recovery for the rider who spent a large part of 2011 on the track training for man one of the team sprint has given adequate preparation time before to the Games.

Prior to the world championships, a sixth place finish in the Randaberg, Norway leg of the UCI Supercross series gave Phillips encouragement that he can be in the medal mix. “I think I have proven that I [can contend for a medal] over the course of the year,” the 23-year-old said.

“The best way to describe it in my mind going into competition is the fact you’ve got between six and eight athletes that are genuine medal contenders and if you can put yourself in that group then anyone of the six to eight are going to come out with those three medals.

“I know that the form I had at the world championships was going to be good enough or thereabouts, it’s just looking to get back into that form come the Olympics.”

After the heartache of Beijing, where Reade crashed in the last corner of the final, London offers the chance for one of the greatest female BMX riders of all time to banish the memories of four years ago.

Still only 23-years-old, Reade has three elite world championships to her name. The 2012 world championships brought a silver medal in the time-trial competition but a fall in the first corner of the quarter-final ended her ambitions of a fourth world title..

Victory in the Olympic BMX test event last year in front of the home fans showed Reade was still one to watch in the women’s competition, before an injury early in 2012 meant she missed a large chunk of competition in the run-up to the world championships. Yet the Cheshire Ghosts Rider still showed the raw speed and tactical awareness which placed her as one of the world’s best in the sport.

Despite being crowned women’s BMX world champion in 2007, 2008 and 2010, Reade doesn’t believe she is entering as a favourite, a situation she is comfortable with.

“I don’t see myself as favourite. In 2008 I went in as the world champion and I had won every race I entered in 2008 so then I felt I was going in as favourite but at the moment I’m going in without the UCI jersey on my back, but a little bit as an underdog.

Olympic BMX coach Grant White believes both Phillips and Reade have put in the ground work to enter the competition in the best possible shape: “All that we can do is have them in their absolute peak physical, technical, mental, tactical condition and if we get them in that position, which is the first challenge, then it’s turn up on the day and deliver all of that. At this moment in time I think we’re well on track for all of that.

“They are well prepared to deliver on the day because that’s a whole different bunch of skill sets and I think they can go and do their absolute best and I think once they do that I think the chances of a high-end result are pretty good.” 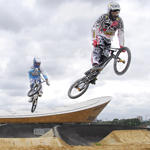 The brand new BMX track is located next to the Velodrome in the north of the Olympic Park.

The men’s track is 450m long and the women’s is 440m long. The entire venue covers a total area of 160m by 90m, slightly larger than the size of a football pitch. The fast and challenging course, which features an eight-metre high ramp at the start, followed by jumps, bumps and tightly banked corners.

After last year’s London UCI Supercross event, the course was modified to make it less demanding after a number of riders were injured.

“I love the track, I think it’s great.” Great Britain’s Liam Phillips said. “They have downscaled things a lot since the test event which I think is a good move in my opinion. The test event was too extreme, it was over and above what was expected. This form of BMX is supercross and this was super supercross, it was far too extreme whereas now there is a real race track.”

The exposed nature of the course means the elements, particularly wind, could play a role within the races and it is worth keeping an eye out to see how it affects the riders.

In the men’s competition, there is no shortage of gold medal contenders, as demonstrated in Birmingham’s National Indoor Arena at this year’s world championships.

Reigning Olympic champion Maris Strombergs was caught behind a crash in the men’s final at Birmingham, denying the Latvian a third world title. ‘The Machine’, as he is known, however still possesses the explosive starting power that has helped forge his reputation and it would be a major surprise should he not be present on the start ramp come the final.

American Connor Fields has been the form rider of the season, winning the Chula Vista and Randaberg rounds of the UCI BMX Supercross and the time-trial superfinal at the world championships. A crash in the penultimate turn in the quarter-final sent him out and is a case in point of the fine line between success and failure in the sport.

Current world champion Sam Willoughby will be hoping to continue to make the UK a happy hunting ground after his triumph in the Midlands, the 20-year-old Australian world number one couldn’t be in a better position entering London. Former world champion Joris Daudet (France) and South African Sifiso Nhlapo will also be ones to watch but in BMX expect the unexpected.

The women’s contest is equally spoilt with talent. France’s Anne-Caroline Chausson will not be present to defend her title but in world champion Magalie Pottier, the French have a replacement who could make it back-to-back BMX golds. New Zealand’s Sarah Walker had a subdued world championships having only just returned from injury, but has the technical prowess to make up vital seconds in the rhythm sections of the course.

The form rider of the 2012 season however is Australia’s Caroline Buchanan. The 21-year-old became Australia’s first woman winner of a BMX Supercross round in Randaberg, Norway and backed the result up with second in Papendal before winning the time-trial superfinal at the world championships.

The 2011 world champion Mariana Pajon will also pose a medal threat, the Columbian’s contribution to the sport reflected when she was selected as flag bearer for the opening ceremony in London.

The BMX competition will be broadcast live on the BBC, on their red button and online services: http://www.bbc.co.uk/sport/olympics/2012/sports/cycling-bmx.