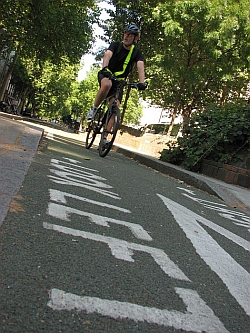 The first of 500 junctions to be reviewed under moves to improve cycle safety were announced today, including suggestions of giving bikes an "early start" at green traffic lights.

The move by Transport for London (TfL) follows the first cycle death of the year in the capital last Friday, which led to calls for urgent improvements. A number of busy junctions in the capital are among those proposed as priorities for review by the summer, with the aim of delivering some improvements before the start of the Olympic Games.

Mayor of London Boris Johnson said: "We are seeing a step-change in both the way that people choose to travel, but also in the way that cyclists are viewed on our streets.

"That is why I firmly believe that we must now start to evolve the means by which we plan and manage our extensive network of roads, and why I have asked TfL to review hundreds of key junctions across the capital to specifically examine safety and provision for cyclists."

A new design for a roundabout in Bow, east London would give cyclists an early start at green lights, said TfL.

Reacting to the news, British Cycling’s Policy and Legal Affairs Director Martin Gibbs said, “It is encouraging to see Transport for London taking action to identify and review the layout of potentially dangerous road junctions in the capital. On a national level, British Cycling is taking action for cyclists to help ensure that improvements in road layouts are undertaken in a consistent manner and to a set of nationally agreed principles.”