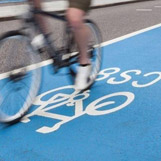 Two new Cycling Super Highways have been opened in London - CS2 from Bow to Aldgate and CS8 from Wandsworth to Westminster.

The two lanes join an existing network of distinctive blue cycle lanes which offer fast, direct routes into the capital for the city's cyclists and which have seen big increases in commuter traffic since their inception. Indeed, some routes have reported more that 100% increases in usage since opening.

For more information on the new routes and the rest of the London Cycling Super Highway network go here: http://www.tfl.gov.uk/roadusers/cycling/15832.aspx