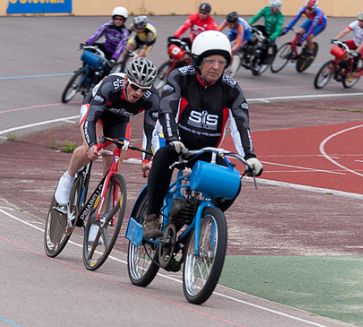 The European Derny Championships takes place this weekend on the 12th November in Montichari, Italy and Adam Duggleby (BBM bikes/Sportscover) will be representing Great Britain after what he describes as "a good season on the track gaining 3 National medals, including runner up in the National Derny Championships, finishing laps ahead of the rest of the field."

Adam is very excited to have the opportunity to represent Great Britain again and to be at the European championships. He previously competed for the GB national team as a junior alongside Mark Cavendish and Ed Clancy.

Adam went on to add: "I have had a great year on the track. I didn't expect to get silver in the Scratch race but I was just going really well at the track Nationals. It is hard to keep the form at this time of year as the nights draw in, but I have been training hard and will try as hard as I can at the Euro Derny Champs."

"I rode at Revolution 33, and this was great preparation for the Championship having European stars to compete against. I raced to second place in the Points Race and was feeling really good. The series offers the opportunity to race at international level and should be a springboard to the European championship. I'm looking forward to riding more of the series.”

Adam concluded by saying, "this is a great opportunity for me to finish the season on a high and a great platform to build up for the 2012 season with BBM bikes/Sportscover Team."