Last Friday - I received notice that my son's Sunday mini rugby tournament was cancelled. This sparked a flurry of phone calls and culminated in three trusty rouleurs meeting at Biggin Hill for the Evans RideIt sportive. 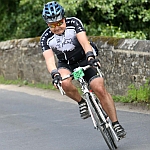 My friend and neighbour Dave and I chose to cycle the six miles from the railway station - whilst sportive newcomer Gav L met us at the event HQ. This was to be Gav's first sportive - and we hoped it would be a gentle sixty mile warm up for an event in Dorking in two weeks time. Hmmm - how wrong we were!

Saturday's glorious sunshine had been replaced with a nondescript overcast day, luckily the rain held off; always a relief when riding in unfamiliar territory and more so when the ride briefing issued stern warnings about the first descent.

Spinning gently uphill for the early section of the ride provided a much-needed warm-up in the brisk, sharp morning; the breath of passing speedsters visible as riders eager to post a good time and clearly in a hurry shot past. Some would be seen again - others gone forever. These are the days that see riders confused, a mixture of tights and shorts, long sleeves and arm warmers, base layers and gilets - the in-between days, not quite summer - but not yet winter.

At six miles there was a steep descent - I seemed to recall something being said at the briefing about a hairpin - but my velocity was building too quickly. I squeezed my brakes - hoping they would bleed a little speed out of my wheels - they didn't. At the hairpin I leant on the bike - hoping that the bend would not tighten up - it did. Suddenly I realised I was in the business of Problem Management and the inevitable clatter of aluminium and thud of flesh on tarmac followed. Given the debris on the side of the road (lights, gels, multi tool kits) I was not the first victim of this bend - but fortunately - walked away with nothing more than a bruise on the buttocks and a sore arm. The rest of the ride would be granted much more respect. Tentatively I checked first my bike, then my clothing - then - lastly - myself. Nothing broken - nothing rattling and nothing lost. A lucky escape.

The autumnal colours of the trees and ancient woodlands provided a seasonal backdrop - the occasional shards of sunlight started to show the colours of the leaves on the trees - changing from lush green of summer towards the autumnal golden yellowish hue. This was a ride that traversed the sandstone ridge of Kent a number of times, the same ridge that runs through Leith Hill and into Hampshire. Peaceful hilltop villages and roads provided tranquil settings for the challenging climbs - Crockham Hill, Toys Hill and Ides Hill. These were tough introductions to the world of sportive riding for my companion - but - even despite a puncture - he threw himself in to the climbs and headwinds with gusto.

Aside from the climbing there were other notable landmarks Chartwell House - home of Winston Churchill, Bough Beech reservoir and Biggin Hill airport. Occasionally - the route liked to remind the rider of its location, set in the garden of England, though the steep southern facing slopes of vineyards more reminiscent of France than England. A reflection of fine British wine production - in this year when British cycling has also proved itself on the continent.

And so - despite a crash, puncture and an off-route jaunt thanks to a missing sign - we managed to post a half reasonable time. The coffee at the event HQ tasted perfect- and the staff were friendly - as were other participants. Gavin was impressed with the camaraderie and everyone who passed us when we were repairing the inner tube asked if we were ok and seemed eager to assist, and the riders with whom we ventured off track with were similarly friendly and chatty.