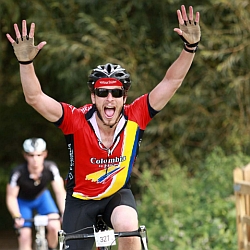 As the sun came up over the newly resurfaced track at Herne Hill Velodrome and over Alexandra Gardens by Windsor Castle cyclists came from all around the world and brought beautiful weather with them. A total of 895 cyclists signed up to the challenging 115 mile and 60 mile rides that departed from the newly resurfaced Herne Hill Velodrome and the stunning Alexandra Gardens in Windsor. The sun shone and the skies were clear for what was to be an excellent day's cycling for all in aid of Access
Sport.

Ride Around London is an annual event organised by the Access Sport and Andy Cook Cycling to help raise money to transform the lives of young people through sport. Access Sport is working to provide a tangible legacy in the Olympic host boroughs of East London and in Bristol, communities where childhood obesity and poverty remain the highest in the country. Funds raised from Ride Around London will help work towards developing 75 community sports clubs by 2013, 50 in London and 25 in Bristol which include 5 new BMX tracks and clubs.

The first riders crossed the line at the Festival of cycling at noon and were greeted with applause from the crowd, goody bag, a medal and hot pasta. ElliptiGO riders and various mountain bikers took on the challenge alongside the roadies over the 115 mile route. The festival of cycling at the end point in Lee Valley Park offered opportunities for people to watch the BMX displays and have-a-go at various types of cycling including BMX and mountain biking.

Former British Champion Maurice Burton and his family joined in the fun. His son Germaine, an U16 National Youth Circuit Champion was the first back from Windsor, and his daughter Grace rode with her father on a tandem. Maurice was full of praise:

"An excellent family day out for which the route was well chosen, signed posted and supported. Access Sport's event management team, Andy Cook and all the volunteers did a fantastic job. We will be definitely putting this in the calendar for years to come. I really hope Access Sport raise the much needed funds that go towards such worthwhile causes!"

Plenty of positive feedback has been received from riders including:

Justin, Cycling Club Hackney: "Really like the change in feel of the RAL as you make your way round - Croydon, to Egham, Windsor Royal Palace, Chalfont hills, North of Watford and then footballers wives into Cuffley - it was all going on."

Ian, 115 mile route rider: "Please thank those involved in organising yesterday. Great route plus good feeding. Made it a good day out".

"On behalf of Access Sport and Andy Cook Cycling we would like to thank our sponsors Chain Reaction Cycles and our partners Lee Valley Regional Park Authority, Pickford's and British Cycling for their invaluable support for this year's event. We also want to say a big thank you to our teams of volunteers all around London for their hard work which has helped make Ride Around London 2011 a great success. We are really looking forward to RAL 2012."

The date for the 2012 edition of Ride Around London is scheduled for release in November.