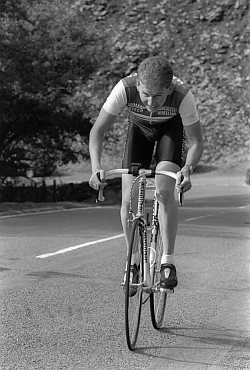 22 years ago, Scott O'Brien raced up the Horseshoe Pass in a Wrexham RC hill climb, coming second only to then teammate Chris Boardman. Next month, he'll ride the Horseshoe Pass again as part of the closed-road 100-mile Etape Cymru sportive, held on Sunday 9th October.

He continued: "I was nervous about this particular climb because it is hard to judge your effort. Some shorter, steeper hill climbs can be ridden like a flat out sprint, but the Horseshoe is more of a time trial."

As a local lad, O'Brien's participation in the closed-road Etape Cymru is likely to bring back some memories from his racing days. "I have ridden up the Horseshoe Pass countless times in training as a youngster," added O'Brien.

"I spent many a Wednesday in the summer holidays in the 80s riding to Llangollen, swimming in the river, then riding home (a 90 miles round trip) before going to ride the Kirby Track league in the evening!

"I am looking forward (if not a bit apprehensive) to be riding on the roads I last trained on 18 years ago. I have started doing longer rides and have ventured to the lower foothills of Wales recently, but nowhere near the level of the Horseshoe or the other climbs on the route."

Before the event, riders can take on the Horseshoe Pass Challenge and submit their times to the www.etape-cymru.co.uk website. They won't be able to beat Scott O'Brien's time of 09.25, however, because that started further down the course than the Etape Cymru's challenge. But riders can have a go at taking on Geraint Thomas MBE's time of 14.22 or GB U23 rider Sam Harrison's 14.27.

The Etape Cymru is pleased to welcome Zipvit Sport and Mavic as official partners for the 2011 closed-road sportive event.

The iconic yellow support vehicles of Mavic will be on hand at the start and on the route to provide mechanical assistance.

The Mavic team of mechanics travel nearly half a million kilometers a year providing 1,200 days of assistance to cycle events and will bring a Tour de France feel to the spectacular Welsh countryside next month.

With over 6000ft of climbing over the 100-mile route, official energy supplier Zipvit will be strategically positioned at 25, 50 and 75 miles to provide riders the opportunity to refuel with Zipvit's energy bars and gels. In addition to the feed stations, Zipvit are also offering special edition Etape Cymru packs with free gifts at registration.

Alex Coventry, UK and Ireland Sales Manager for Mavic, said: "Mavic are delighted to support a new and exciting closed road sportive with our neutral support vehicles. We'll be at registration helping participants out with any last minute problems, as well as en route to help with mechanical issues."

Ben McKay, Brand Manager for Zipvit Sport, said: "The 100 mile route in North Wales is going to be a tough one, and with the distance it's even more essential than usual to fuel correctly. So we're delighted to offer our class-leading and pro-proven products to Etape Cymru entrants at their feed stations."

The Etape Cymru, powered by TweeksCycles.com, takes place on 9th October and is only the second fully closed road event within the UK. The event, which starts and finishes in Wrexham, North Wales, passes through the Clwydian Range, which is an area of outstanding beauty. The route takes in several well-known climbs such as: Horseshoe Pass, The Shelf, The Garth and Worlds End.

Team Sky's Geraint Thomas MBE, who is backing the Etape Cymru and has ridden the route, described it was "spectacular" and "challenging but fabulous".