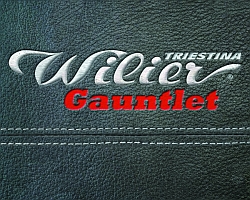 The Cycle Events Organisation have announced some big news for the Southern Sportive on September 11th. They are throwing down the Gauntlet to riders who are looking for a bigger challenge from the event. Working with Wilier Bikes, they have added the Wilier Gauntlet; a testing 35km extension to the classic Southern Sportive course that bringe the total ride up into the 200km super sportive bracket.

The Southern Sportive course is a perrenial favourite, and has remained largely unchanged since it was first run in 2006. As the CEO's Martin Harrison tells us, "We've always said that we don't want to mess with the classic Southern Sportive route and we haven't; the classic 155km full route has received so much praise from riders and press over the years, that we know we'd be foolish to change it. So it's still there in all its glory, and still one of the best and most scenic sportive rides in the country.

"But we know a lot of riders want more, and as the sportive scene develops, are looking for bigger challenges to take on. So the Wilier Gauntlet adds a 35km loop towards the end of the route, that extends the ride further into the stunning Meon Valley and adds nearly 600 metres more climbing. That gives you a days total of 192km with 2900m of vertical, including four extra good climbs and a stubborn sawtooth set of rollers to test your momentum at the sharp end of the day. But to help you round, you'll get an extra support station on the route plus a commemorative Gauntlet finishers souvenir."

The Wilier Gauntlet is the same price as the Classic Full route and if you've already entered the full route, you can upgrade for free.

To find out more about the Southern Sportive, and to sign up for any of the distances, visit southernsportive.com.