There was an all-time record entry of 398 competitors for round five of Team Royal London 360 Isle of Man's Youth League. 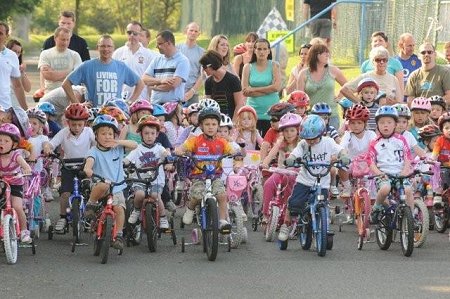 In the novices class Jessica Rich outgunned Summer Peters and Kate Morris for her first win of the season. The fast finishing duo of Fearne Bregazzi and Zack Bellhouse were fourth and fifth ahead of former winners Colby Newbold and Sydney Ella Patterson, with chasers Maeve Tonge and Lewis Quirk trailing in for eighth and ninth. Jarno Davidson pipped Joseph Devereau for the final place on the top ten leader board.

In the born 2007 and later age group Sam Cowin led Alex Andrew and William Curphey over the line to complete a hat-trick of victories. Archie Dunn was a solid fourth and George Kinnish outsprinted Charlie Scarffe and James Kelly for fifth. Alec Sorby took the bunch gallop for eighth and fifteenth placed Jemma Quayle claimed the girls' prize for the second week running.

Zachary Dowson dropped breakaway partner Ivan Sorby on the final lap to secure his second success in the born 2006 race. Cian Jackson outgunned Corey Peters for third and David Sargent beat Owen Collins in the scrap for fifth. Samuel Devereau was a lonely seventh and relative newcomer Dominik Stawney did well to get the better of Peter Cope in the dash for eighth. Callum Clague completed the top ten and Grace Gawne was the best girl in twenty-first spot.

Niall Colquitt and Harry Kneen escaped from a leading group of six riders to claim first and second respectively in the born 2005 category. Oliver Sykes held off Chloe Dillon (1st girl), Mairi Harrison and Chloe Comaish in the battle for third, while Oliver Corkish was too quick for fellow chasers Teddy Dunn, Harry Boyle, Tyler Annis and Charlie Cowin in the sprint for seventh.

In the born 2004 event, Zac Walker forged ahead of Dillon Dowson in the closing stages to notch up his fourth win of the series. Ralf Holden led Billy Kennedy home for third and Cameron Dudley got away from Daniel Keen to snatch fifth. Joshua Dudley pipped Callum Crellin for seventh and Megan Boardman headed Nancy Wheeler over the line to take the girls' honours in ninth place.

As usual the three racing bike events brought the evening's action to an exciting close. In the under 10s Charlie Gibson had to fend off strong challenges from Percy Hampton and Will Corkill before securing the victory. Jake Wilson was a good fourth in front of Aaron Lund and James Harrison, who completed the top six.  Recently North West circuit race champion Charlie Moss was the top girl in twelfth position. The under 12s event exploded on the last lap, with Thomas Bostock proving to be the strongest in the final dash. Tosh Teare and Max Walker were second and third and eleventh placed Chloe Crellin the first girl.

Jamie Dudley and Matthew Draper made valiant but ultimately unsuccessful solo attempts to get away in the under 16 racing bikes. Nathan Draper and Leon Mazzone also tried their luck before the final sprint which Dudley won from Matthew Davies and Matthew Bostock. The under 14 honours went to Matthew Draper in seventh place and Breeshey Cain rode strongly to take the girls' prize in eleventh position.