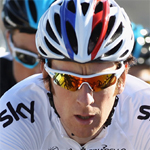 Team Sky's Bradley Wiggins won stage one of the Tour of Romandie with a remarkable sprint, holding off a host of more fancied finishers to claim the first Protour road stage win of his  career (he did win a Tour de l'Avenir stage earlier in his career).

A climb late in the stage accounted for some of the leading contenders, including overnight leader Geraint Thomas and Mark Cavendish, but Wiggins was clearly in the mood to take the initiative.

He policed several late moves and then led out the sprint from perhaps 600m, getting out of the saddle and going again just as the riders around him seemed about to get on terms. In the end the win was pretty comfortable as those around him stalled in their efforts to come round him.

A bout of fist-punching showed how much it meant to the National Champion, whilst a round of back-slapping from the riders he vanquished in the sprint suggest it was a popular win within the peloton.

Commenting after the race, Wiggins said: “I had a lot of adrenaline after I punctured with 25k to go. When that happened the boys dropped back for me and did a fantastic job.

“Then in the final I was kind of on my own and marshalling everything and I just wanted to pay them back for everything they’d done, they were incredible. I’ve got them to thank and it was really nice to be able to finish it off like that.

“I went a bit early and had to sit down to rest for a bit and then went again but it was good to get the win!

“I want to win Romandie, that’s for sure. I’ll take what I can every day and it’s really nice to win a sprint like this because normally I only ever really win time trials.”

Geraint Thomas powered to victory in the prologue at the Tour de Romandie to move into an early race lead.

The Brit put his track training to good use across the 3.34-kilometre course to set a blistering time of three minutes and 29 seconds as the Swiss stage race got under way.

The 25-year-old moved into the yellow leader’s jersey by a four-second margin after his time stood up against some intense competition, largely from his own team-mates.

Mark Cavendish put in a superb performance to clock a time of 3:35, good enough for third place while Michael Rogers claimed fourth in what was a resounding success for the team.

The rain began to fall as the later runners left the ramp, yet just as in Paris-Nice, Bradley Wiggins was able to pull out an impressive ride in difficult conditions to register a time just nine seconds off that of Thomas.

“I always knew that I had a good chance. But it’s one thing knowing that you have a good chance and another thing winning. It’s very nice. Obviously the weather played a big part in that but there was only really one corner and you can only lose so much time. But it’s great to win and at a lovely race as well. I raced here last year so it’s great to come back and get this win.

“Today was an objective as it’s similar to the track but for the rest of the race I’ll help Cav in the sprints on which ever stages come down to that and then look after Bradley. He’s here to do a good ride on the GC. The team have come here with big ambitions looking to do well every day and hopefully we can get a few more stage wins and Brad can pull off the GC.

“The team has stepped up a level each year now. As we saw in Paris-Nice it is a strong team. Obviously I’m not going to be anywhere near the lead come the end, but I think it’s good for the team to get the win and get the jersey. It’s always good for morale. This race means a lot to the team and we’ve got big ambitions here.”

“The goal when we came here was to try and win GC. I think we have more than a realistic chance of winning it come Sunday. Today was a bit of an extra bonus. If it had been dry it wasn’t out of the question that Bradley might win the prologue. G coming off the track obviously has the ideal preparation for a three kilometre prologue. But a great performance on the track doesn’t always equate to a great performance on the road.

“G has been around for a while now on the road and the course in particular suited him in that it was very high speed. He’s very aerodynamic and he also had the power to use to his advantage. His time in the final kilometre was quite astounding. He was flying!”