Undeterred by a heavy shower just before the start of the event, a total of 355 competitors made it down to the National Sports Centre for round two of Team Royal London 360 Isle of Man's youth league. 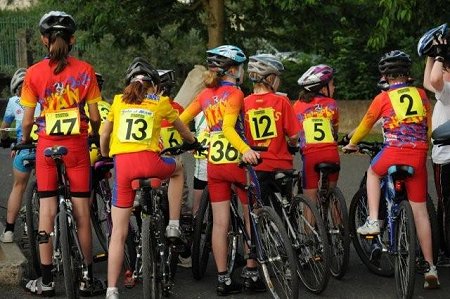 In the born 2007 and later category Issac Batty forged ahead of Sam Cowin, Alex Andrew and William Curphey on the finishing straight to bag maximum points. Orry Lund was a safe fifth ahead of Charlie Scarffe and Myles Le Geyt passed Edward Field in the final few metres to grab seventh. Tadgh Hall led the chasers home for ninth and Ellie Robinson secured the girls' honours in twelfth spot.

Ivan Sorby came out on top in the born 2006 race for the second week in succession, crossing the line with a clear advantage over runner-up Zachary Dowson. Glen Vine's David Sargent snatched third from Peter Cope, Cian Jackson and Samuel Devereau, with Logan Glover trailing in on his own for seventh. Corey Peters, Harry Price and Harry Callin completed the top ten and Lucy Barnett was the leading girl in seventeenth position.

Harry Kneen took the win in the born 2005 age group after Niall Colquitt crashed on the final corner while contesting the lead. The hard chasing Oliver Sykes got past Teddy Dunn on the last lap for a very good second and Oliver Corkish outgunned travelling companions Harry Boyle and Charlie Cowin in the battle for fourth. Top girl Chloe Dillon headed the rest of the field home for seventh, with Colquitt doing well to salvage eighth.

Attacking from the gun, Zac Walker powered his way to an impressive solo victory in the born 2004 class. Dillon Dowson gave chase but was unable to bridge the gap and had to settle for second ahead of Oliver Harrison and Ralf Holden. Twin brothers Joshua and Cameron Dudley were fifth and sixth followed by Billy Kennedy, Callum Crellin , Cian Gell and Nathan Slack, who beat Andrew Tobin and Daniel Keen to the line for tenth. Megan Boardman ousted Nancy Wheeler and Mia Worthington to take the girls' prize in fourteenth place.

Percy Hampton had the edge on breakaway partners Jonty Bregazzi and Matthew Black in the gallop at the end of the born 2003 event. Thomas Skillicorn held off Tyler Hannay, Matthew Cooil, Jack Christian and Jamie Gelling in the dash for fourth, while Thomas Young got the better of Joshua Glover for ninth. Jack Collister came through the main bunch to grab eleventh from Freddie Ralston and top girl Darcy Cain.

In the born 2002 three lapper Charlie Gibson got the verdict in a six man sprint for the flag. Aaron Lund grabbed second ahead of James Harrison, Will Corkill, Corrin Leeming and Nicholas Kissack, with the ever improving Louis Dean leading Shellan Leeming (first girl), Blae Cain and Joshua Mills in for seventh. Tom Kermode was a lonely eleventh and Nathanael Tyson came from behind to snatch twelfth from Ethan Quirk, Callum Crompton and Kyle Batty.

After breaking free from the pack in the closing stages, Lucas Mudie beat Sam Batey to the line for his first success in the born 2001 and earlier grouping. Ben Christian was too quick for Adam Kelly, Alex Cain, Joseph Corkish, Kaitlin Slack (top girl) and Emma Draper in the race for the final podium position.

Percy Hampton broke away from fellow frontrunners Jake Wilson, Aaron Lund and Will Corkill to claim the honours in the under 12 racing bikes. Dillon Dowson overcame Zac Walker in the tussle for fifth and Corrin Leeming overtook Matthew Black on the final run in to take seventh. Charlie Moss took the girls' award in ninth place.

Thomas Bostock had to fend off a strong challenge from Tosh Teare before claiming the victory in the under 12 racing bikes. Conor Gelling outsprinted Adam Scarffe and Max Walker for third and Adam Kelly got ahead of Tyler Cain and Thomas Longden for sixth. Sam Batey was ninth and Emily Bridson the best girl in tenth spot.

The following under 16s race was red flagged while the track was cleared after a crash involving Owen Dudley, Matthew Bostock and Nathan Draper. Fortunately, nobody was seriously hurt and with the exception of Owen, who went to Nobles for a precautionary check up, they all restarted the race. Leon Mazzone eventually took the win by a tyres width from Matthew Davies. Third place went to Joseph Haddock, with accident victims Matthew Bostock and Nathan Draper doing well to finish fourth and fifth respectively. Matthew Draper was the leading under 14-year-old in sixth position and Elizabeth Holden the first girl in a fine seventh place.

Their Royal Highnesses Prince Charles and Camilla, the Duchess of Cornwall, will be watching a youth cycle race on their visit to the Isle of Man on Thursday 26 April.

The royal couple's visit is part of the Diamond Jubilee tour to mark the 60th anniversary of the Queen's accession to the throne.

Prince Charles and his wife will begin their visit with a trip to the National Sports Centre in Douglas, where they will watch members of Team Royal London 360 youth cycling club take part in a short demonstration race, which the royal couple will be invited to start.

During their visit their Royal Highnesses will be presented to local politicians and dignitaries, including Dot Tilbury MBE from Team Royal London 360 and world track champion Peter Kennaugh. They will also meet and chat with the young cyclists who took part in the race.