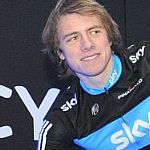 Edvald Boasson Hagen signalled his strong form with second place in the sprint at the season-opening Down Under Classic.

The Norwegian benefitted from strong work from his Team Sky lead-out train in the closing laps of what was a frantic finish in Adelaide.

A wide line into the final corner meant Boasson Hagen was always going to be on the back foot with German Andre Greipel able to open out a gap and hold on to the finish.

The Lotto-Belisol rider timed his effort well but second place bodes well for Team Sky’s 24-year-old heading into the Tour Down Under which kicks off on Tuesday.

As the recogniser opener for the 2012 international Road season, perhaps the strongest field in the history of the race lined up in front of a record crowd in the East End of Adelaide for the 51 kilometres criterium which was played out over 30 laps of a 1.7km wedge-shaped course.

Full report, plus reaction from Sean Yates on teamsky.com

Of the British riders in the race, Geraint Thomas finished in the bunch, whilst Adam Blythe, Andrew Fenn (on his Omega Pharma-QuickStep debut) and Alex Dowsett were amongst a number of riders strung out off the back of the main field.

Adam Blythe also offered his 140 characters of wisdom: "Decent race this evening..... @BMCProTeam did a good job, Just didn't have the legs in the last few laps!"