Pearson was fourth and had 45 seconds to make up on the leader heading into the final day, but his audacious bid for glory paid dividends as he crossed the line alone more than two minutes ahead of his rivals to take the overall victory.

A strong performance from the Cwmcarn Paragon trio of Andrew Butcher, Darran Carpenter and David Povall put them in a strong overall position, covering the 7.1-mile course for the team time trial in 16min 31sec, 37 seconds ahead of their nearest rivals, Port Talbot Wheelers.

Maurice Brennan took victory in stage 1A, which covered 53 miles, the Redhill CC rider covering the course alone, just over a minute ahead of the chasing pack which included Butcher, while Carpenter was 1:16 behind in ninth.

But time bonuses gleaned on Stage 1A meant that Carpenter was leading heading into the final stage on Sunday, having five seconds over his team-mate Butcher. Maurice Brennan (Redhill CC) was lying third, 14 seconds off the pace, and Pearson was 45 seconds behind Carpenter in fourth.

But after sunny and calm conditions on Saturday the weather turned on the riders, lashing them with wet Welsh rain and cold winds which turned a difficult hilly final 45-mile stage into a nightmare.

However, Pearson looked strong as he headed over the prime at Glynogwr after 18 miles of the stage and he attacked the bunch, catching them off guard and quickly opening up a solo lead. He powered on and was soon two and a half minutes ahead and leading the race on the road.

The bunch soon realised the danger and chased him down. But they had left it too late, and Pearson crossed the line alone to take the stage win by 2:04 and take the overall victory by 59 seconds. 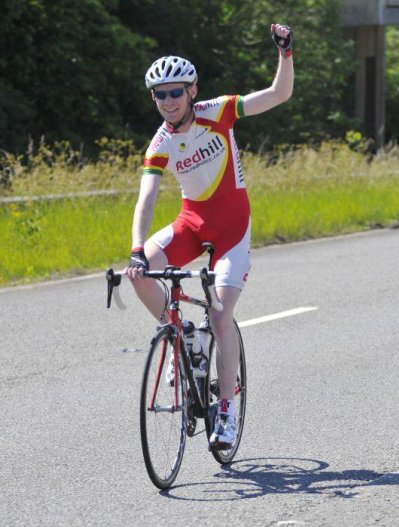