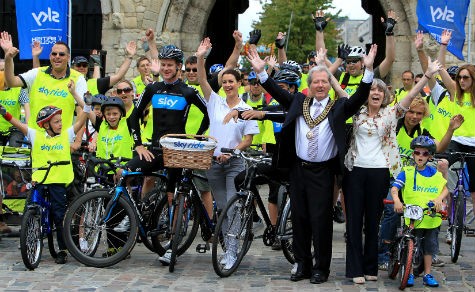 14000 cyclists participated in today's Sky Ride fun event around the city centre and docks of Southampton. The bright sunshine certainly helped keep the cyclists spirits up as they made their way around the route.

Many families and individuals came to Southampton City Centre to enjoy a day's traffic free cycle ride in good weather conditions. The Sky Riders rode bikes of all shapes and sizes, joining them on the route were Unicyclists, Old Ordinaries and even one brave Rider managed to complete the circuit without any tyres.

The 7.3Km traffic free course took the Sky Riders from the Guildhall, into Palmerston Park, down into Houndwell Park, around into the main shopping area, through The Bargate, down towards and round the Dock area and back to complete the loop.

The course had several stop off points for riders to rest and take part in the many activities, in the British Cycling area families could take a break from the route with a drink from the Bike Cafe whilst the kids could enter the British Cycling's "Design a Jersey" competition to win a new mountain bike or even crayon a bright design onto their Sky Ride bibs. Staff were on hand at the British Cycling stand to give advice on all aspects of cycling, and the events for all cycling abilities coming up in the area.

In the park areas, local bands entertained the Sky Rides as they passed by and little ones could meet Dora the Explorer in the children's play area, listen to a story from the storyteller or get their faces painted.

In Guildhall Square cyclists were encouraged to stop and take part in the roller racing competition organised by South Coast Sprints or watch the amazing stunts performed by M.A.D Display squad. Ray Ball from Southampton's City Council's Neighbourhood Warden Service assisted many riders with bike maintenance problems, repairing bikes and sending them on their way again around the route. Down in the Docklands area the BMX Flatland Tricksters entertained the crowd with displays of tricks and stunts.

Sky Ride Ambassador Kirsty Gallacher, along with Team Sky riders Michael Rogers and Davide Appollino, joined the Sky Ride at The Bargate to officially start all the Sky Riders on their way. Kirsty stated that she was rather impressed with all of the folks who had come along today to take part the Sky Ride.

In the afternoon Michael Rogers and Davide Appollino took part in one of the Go Ride Sessions with some of the kids who had stopped off in Houndwell Park, Kirsty Gallacher watched on, encouraging all the youngsters as they put the two Team Sky riders through their paces.

We spoke to a number of Southampton's Sky Riders to see what they thought about the day:

John and Mary from Eastleigh, said of today's event. "It's been absolutely marvellous. We have had a lovely day, it's been nice to go around the city without any traffic. This has encouraged us to go out and do more cycling."

The Jones family from Southampton said "We have really enjoyed our day, the children have enjoyed stopping off at the various activity points along the route, and we have not cycled much as a family before but this event has made us think about getting out on our bikes more often."

The Colemans "It's been a fabulous event, it was so lovely to see so many people out riding their bikes and enjoying themselves, we do cycle regularly and this event will encourage more people to get out on their bikes."

If Sky Ride Southampton whetted our appetite for getting back on your bike, Sky Ride Local rides are running every Sunday through the summer in and around the city.