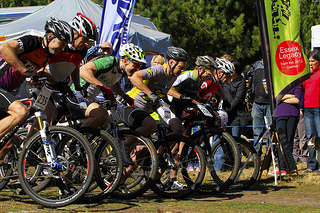 Mud, Sweat and Gears round 1 almost lived up to its name with lots of sweat and gear changing going on but the mud being replaced by glorious sunshine. The hot conditions meant fast, dry trails for the racers to enjoy.

The beautiful weather brought out a large entry with everyone keen to start the new series with a good result.

The morning race saw a good number of female riders take the start with expert rider Laura Sampson (Stowmarket and District CC) leading from the front and never looking back. In the female sport race Alex Nichol, new to MSG and representing her new CCN team made the most of a quick first lap to take a fantastic first MSG win. Behind saw a close battle for second and third between Emma Cook (Rockingham Forest) and Donna Crake until Emma stretched her legs on the second lap to take a fine second place. The vet female race was again a close race with Anita Buxton (Thetford MTB) winning form Sue Mcintyre (Newdales Cycles) and Vincenza Perkins (Numplumz).

The second race of the day had a massive entry of 50 under 12’s riders racing, many for their first time. The under 12’s enjoyed a one and a half hour coaching session in the morning with British Cycling qualified coaches followed by a little break to have a drink and a bite to eat before taking the start for their 20 minute race. In the boys race Theo Modell (ELV) took the win from Felix Mackie (Lee Valley Youth) who enjoyed a close race with Troy Wingar (TROG) who finished third. The girls race was won by Lottie Wylde with Caitlyn Sampson (Stowmarket and District CC) in second and Imogen Pitcher in third.

The afternoon race witnessed all the male senior racers. The elite/expert riders went off at a rapid pace with lap times in the 17 minute bracket. The battle for the lead was close until the third of six laps when Richard Jones (XCracer.com) broke clear and went on to win from Andrew Cockburn (Cambridge CC) and Ian Mockett (Thetford MTB).

The masters race was a close run contest with Nigel Scott and Dan Howe (TROG) never more than a minute apart. Nigel Scott prevailed though with Shaun Aldous (Team CCN) rounding off the podium in third.

The sport race gave us the closest racing of the afternoon as the top four were only separated by 56 seconds. Teammates Mark Barnes and Tom O’Neill (Pedal Revolution Norwich) traded the lead for the entirety of the race with Mark Barnes winning in a photo finish sprint to the line. Hot on their heals and ready to pounce should either of the leaders hit trouble was Scott Clipstone (Army CU) and Simon Hawken (Four4th) who were having a close battle for the final podium position. Scott Clipstone took third by 19 seconds at the finish.

A new category added to the MSG schedule this year is the junior race. This was won by Callum Riley (Newdales Cannondale) with Lewis Parker (HMF Pedal Power) in second  and Oliver Edwards (VC Revolution) rounding off the podium in third.

With the day drawing to a close it was time to reflect on what had been a great day enjoyed by all with some fast, close racing to watch. The course was well received and all that remains is to thank Tunstall and Rendlesham Off Road Group (TROG) for their support in making the race happen and our sponsors HMF, Chelmer Cycles, Intrepid Apparel, Human Performance Unit and Cycle Evolution.

The next event takes place at Hylands Park on the 29 April.