The final round of the 2010-11 Bromley Go-Ride Racing League proved to be a fitting end to a brilliant first season. Round 5 was organised by Bigfoot Go-ride, and hosted at Ravensbourne School, thanks to a kind invitation from the Ravensbourne Ravens club.

Volunteers from Ravensbourne set up the most challenging circuit yet - a cross country mountain bike course, starting with climbs and descents along a wide but twisting grass track, followed by a long straight plunge into the woods, where a singletrack course snaked in and out of the trees. Emerging from the woodland section the riders faced a steep descent down onto a section of tarmac, a ramp and steps down, then a fast tarmac section before heading back onto the grass and a sharp right hander and a long drag up to the finish line.

With 47 entries and everything to play for in the league, the final event of the year was always going to be an exciting one.

Race one - Cross country time trial
With a longer and more technical course than most of the riders had experienced so far in the league, the one lap time trial would prove a real test of rider skills and stamina. 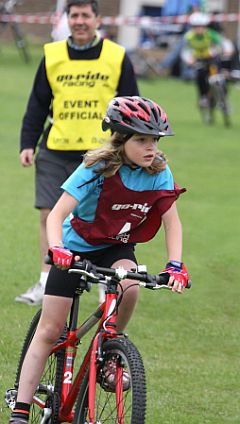 In the Under 8s race, with only six points separating the top three riders at the start, Jack Harradine of Bigfoot Go-Ride set a blistering pace, but was beaten into second place by eight seconds by league leader George Harding (Penge Go-Ride). A good performance by Joseph Wilson of Penge saw him take third place in his first competition.

In the under 10s category, runaway league leader Imogen Meers (Bigfoot) proved unstoppable, winning by 15 seconds from her team mate Irfan Zaman in second place. Four seconds behind, Milly Shemmings was delighted with her first podium place after trying hard all season, making it a clean sweep for Bigfoot.

It was a different story in the Under 12s category, where a clutch of new riders upset the form book, with newcomers taking three of the top four places. Rowan Coombes (Herne Hill) took first place by just two seconds from Bigfoot's Callum McIntyre. Third place was taken by Tom Slade, from Ravensbourne Ravens. League leader Fraser Spooncer finished down in sixth place, scoring enough points to stop his closets rivals Callum McIntyre and Sam Hopkins gaining too much ground.

Race two - Cross country MTB race
With a narrow singletrack course forming much of the second half of the circuit, the challenge for the cross country MTB race was to get a good early position while leaving enough in reserve to defend it to the finish.

In the one-lap Under 8s race Cameron McIntyre saved his best to last. He stormed away from the start line, and never looked back, holding on for a fine victory, which he celebrated with style as he crossed the line. League leader George Harding came in second place, with closest rival Jack Harradine in third. It had been a close battle between these three riders all season, so it was fitting that they shared the top three places in the last event.

The only question in the Under 10s race was: can Imogen Meers be beaten for the first time all season? The answer was an emphatic "No!" A strong start from Bigfoot's Jack Friend put her under early pressure, but she kept her cool, chose her moment to overtake and won by a good margin. Imogen came first in all 10 races in 2010-11 and finishes the season unbeaten - a fantastic acheivement.

Jack Friend's early effort paid off as he held on for second place from team mate Irfan Zaman in third. With Joseph Harris in fourth place and Milly Shemmings in fifth, Bigfoot took a clean sweep of the top five places in the race.

With a two lap race and a clutch of new riders, the outcome of the Under 12s race was uncertain, and in the end several of the top spots went to new riders. The result was the same as in the time trial, with Herne Hill's Rowan Coombes taking first place from Bigfoot's Callum McIntyre, who was fighting for every point he could get. Home rider Tom Slade (Ravensbourne Ravens) again took third place. 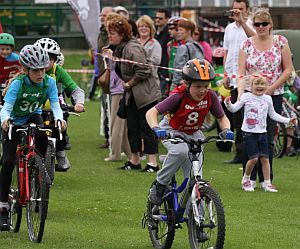 League leader Fraser Spooncer finished in a comfortable fifth place, sealing his overall league victory, while Sam Hopkins held on to finish in sixth, earning enough points to keep his second place overall by a single point from Callum McIntyre.

The Under 14s group was shaken up by the entry of several new riders. In a repeat of the time trial, Harrison Coombes (Herne Hill) took first place, followed by Lee Fiddler and Chris Stanley from Ravensbourne Ravens.

Go to www.bromleygorideracing.org.uk for full results and league tables.

We'll be back for more next year, so watch this space!

Check out The Hub's new Facebook page for more photos and Go-Ride updates. The more 'Likes' we get the better!