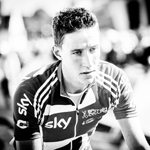 Great Britain’s Josh Edmondson (right) was 50th in the bunch sprint which concluded the Under-23 Men's race at the World Championships, in Holland. The race was won by Alexey Lutsenko (Kazakhstan) from Frenchman Bryan Coquard Belgian and Tom Van Asbroeck (Belgium).

The other two GB riders in the race, Mark Thwaites and Simon Yates, finished 94th at 31 seconds and 105th at 3 minutes 34 seconds respectively.

The race was neatly split into two halves: a three rider break consisting of Dahlstrom (Swe), Kinoshita (Jpn) and Freiberg (Aus) going clear on the opening lap and staying away for almost seven laps. although they had well over six minutes advantage at one point, the peloton always had things under control and reeled them in with ease just after the mid-point of the 11 lap race.

This was then followed by a more edgy and active second half of the race during which a number of small reaks formed and were then caught, none of them gaining more than half a minute's advantage at best.

The Italian team was particularly active through the closing laps, launching a series of attacks, with Andrea Fedi featuring heavily. However, they perhaps tried a little to hard as they began to pay in the last lap and a half, when the six-man Kazakhstan team began to take over.

The light-blue clad train moved to the front and played a siginificant part in snuffing out a series of dangerous attacks and keeping the main field largely intact right up to the last climb of the famous Cauberg ascent.

Even then, with the field beginning to fragment it was the Kazakhstan riders who formed at the head of the front group of a thinning peloton and chased down the handful of riders who broke free over the top of the climb with the finish almost in sight. Their hard work was repayed in full when Lutsenko produced a powerful and suprmely well-timed run to the line to claim the win.

GB's trio of riders, Josh Edmondson, Simon Yates and Scott Thwaites stayed well out of trouble throughout. Edmondson in particular showed well at the front at a couple of crucial stages of the race, but ultimately he and his team-mates were swamped in a frenetic run to the line, their lack of strength in numbers not allowing them to dictate as the race reached its climax.

After the race, Thwaites tweeted "Didn't have the legs at the end today! Enjoyed riding another worlds! Thanks for all the support."