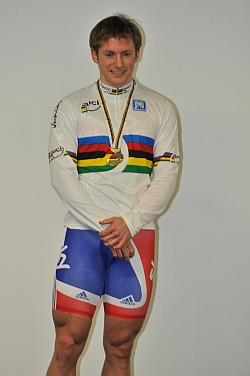 Jason Kenny tonight became the first Briton to be honoured in the Olympic Velodrome, belatedly receiving his Track Cycling World Championships gold medal and rainbow jersey on the first night of the London Track World Cup.

Kenny received his first senior World Championship title after being promoted from second place after France's Gregory Bauge, world champion in 2009 and 2010, was last month stripped of the 2011 title for an anti-doping violation.

The 23-year-old from Bolton, Olympic silver medallist behind Sir Chris Hoy, was presented with the prize by British Cycling president Brian Cookson in a low-key ceremony in the bowels of the Olympic Velodrome, rather than on the podium in the centre of the track. Germany's team sprint squad also received their gold medals and rainbow jerseys.

Kenny said: "It's a strange situation, but it's nice to have it now and it will be good to race in it on Sunday. I just want to get on with the racing."

Kenny learned of his promotion last month after Bauge was stripped of the title and will race against a strong field in Sunday's individual sprint, one which includes Bauge and Hoy.

"That will be special, especially in front of a home crowd and hopefully I'll be at the thick end of the sprint," Kenny added.

Sunday's racing will be all the more intriguing as, due to regulation changes, only one rider from each country can compete in each event in August's Olympic competition - that leaves Kenny and Hoy battling for one spot.

However, tomorrow the duo will be team-mates, along with Ross Edgar in the three-man, three-lap team sprint. Now the world silver medallists following France's demotion as a result of Bauge's violation, Britain are yet to fully fire in the event since key starter Jamie Staff's retirement.

Kenny, though, is confident Britain can deliver in Olympic year. He said: "Everyone's quite excited to get up and see what we can do. I'm pretty confident we've got a good ride in us and we've had a good ride in us for a while - it's just a case of getting it out. We've missed out on a few medals and even a few second rides at times. If we can get out, smash the qualifying that will put us in a good place and give us a chance at a medal."