Double gold medal winning Para-Cyclist Simon Richardson is now out the induced coma he was placed in following being struck by a van whilst out training near Bridgend in August. 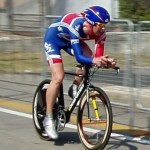 Richardson, who began the medal landslide at the Beijing Paralympics in 2008, suffered spinal fractures, a broken pelvis and breastbone and a detached lung as a result of the incident which took place on the morning of 17 August on the A48 near Bridgend. A 59 year old man was arrested following the incident and is currently on police bail.
Richardson is now conscious, is breathing unaided and his back fractures are not as serious as first feared.

Richardson's friend Phil Jones, who has been close to Simon and his family since the incident, posted this personal message from Simon on his blog:

"Thank you to everyone, I've no re-collection of the past month of my life so to wake up and discover what's been going on is quite a surprise. I'm shocked at the sheer numbers of people who have been so supportive and just how the cycling community in particular has supported my wife Amanda and sent their messages of support to me."

Richardson competes as a Para-Cyclist due to injuries sustained on a training ride back in 2001. Following the incident, the 44 year old Portcawl rider used cycling as a rehabilitation tool, ultimately culminating in him competing at Beijing in 2008, where he won three medals; gold in the LC3-4 Kilo and Individual Pursuit, as well as silver in the Road Time Trial.

Richardson and his doctors are now fully focussed on his recovery, aiming to gain sufficient strength to move from intensive care to a trauma unit, where further rehabilitation can commence.

Following the incident, British Cycling and its specialist personal injury solicitors Leigh Day and Co have been in regular contact with Simon's wife and have been supporting the family during the last few traumatic weeks. The organisation has also redoubled its efforts in addressing safety issues for cyclists, embarking upon a member survey to help highlight key road safety issues, using the information to engage Government and seek the necessary changes in legislation.