For many cyclists, it’s still the height of the summer season, but if Cyclo-Cross is your chosen discipline, preparation for your 2012-13 season is probably already underway.

Late last month, two of the country’s leading young riders, Hugo Robinson (Elmy Cycles) and Jack Clarkson (Hope), began their preparations with a short “Cyclo-Cross Development Camp” at the UCI’s headquarters, the World Cycling Centre (WCC) in Aigle, Switzerland. The camp itself was funded by the UCI and the riders’ travel by British Cycling. It was an unmissable opportunity for the duo to experience a continental approach to ‘Cross. 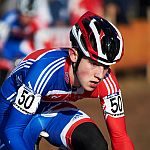 We spoke to Jack about the camp soon after his return to the UK. Jack also shot some helmet/bar cam footage which we've put together into a short video which gives a good sense of the variety of riding the duo experienced in Switzerland

The two guys charged with delivering the coaching were Beat Wabel a former junior world champion and nine times Swiss Champion; and Geoff Proctor, USA team manager, former world championship rider and one of the most respected coaches and writers in the sport.

Twenty young riders, from as far afield as Turkey, Italy and Slovakia, attended the camp and ensured a broad spread of talents and approaches to the sport, though with only two women participants, it was heavily male dominated.

An early morning flight from Luton to Geneva saw Hugo and Jack arriving at the World Cycling Centre in time for lunch.

Jack’s first impressions were very positive: “It’s an awesome place: you think Manchester Velodrome is special, but it’s another league. You walk down the corridor and it’s the governing person for this or that discipline walking towards you and there’s a real sense it’s world HQ of the sport. What was also cool was the way they fly up and down the corridors on BMX bikes and scooters.”

A leisurely afternoon settling into their digs, a few hundred metres away, and building up their bikes, was followed by dinner and a classroom session during which introductions were made and the four days of coaching mapped out.

Day one, a Tuesday, set the pattern for the rest of the week. The riders had to be up for 6am, making their way immediately to the World Cycling Centre, for thirty minutes of jogging, stretching, flexibility work and what the coaches called “plyometric circuits”.

A quick jog back to the digs for a shower was followed by breakfast at the WCC, ready for the first on-the-bike session at 9am.

For those who have never visited the WCC, it is situated in its own area of parkland, with a BMX track and an array of Cyclo-Cross bankings, step ups, trails and a magnificent sandpit. The venue is so good that it recently hosted a round of the Cyclo-Cross World Cup (have a look at this Youtube video for a good overview of the scope for Cyclo-Cross at the venue.

As you might expect, all the riders were keen to get going and to prove themselves, but as Jack relates, the coaches soon made it clear that they weren’t looking for that: “Some did seen keen to prove themselves. But skill was the main emphasis, and we were reminded that it was not a performance camp.”

There was also a feedback-led approach to the coaching. Beat and Geoff would put out obstacles such as hurdles or lay out a short section of course and ask the riders to tackle it as they watched. The coaches would then simply observe the riders in action for a time before giving any input. Jack outlines their approach: “They would perhaps put set of hurdles down and then let you go and do your own thing. Then they would feedback on what they were seeing and start to work on skills. That might be simply putting a cone down to show where you should be getting off as you approach a hurdle.”

The coaches then might give a demo of various technical aspects, with tips. For example, the riders were told that the optimum approach to tackling a hurdle on the flat is six steps, two before and four after.

Jack outlines a couple of coaching points he picked up: “They’d include little tips like giving the bike a big shove before you make that final jump on after a hurdle. They said that that gives you an extra two mph, in turn giving you acceleration and more time to get your feet back into your pedals. And, on steps, they got us thinking about keeping bike high enough to clear the steps but not put it on your shoulder so you don’t delay getting back on.”

As the days went by, this morning coaching session, running from 9 until 11, allowed the coaches to work on a huge range of skills, free from the pressure of a racing. Throughout, the emphasis remained on skill. As well as the more obvious technical challenges, such as hurdles and steps, the riders worked on bunny-hops, sandpit riding, steep climbs and drops, riding the BMX track and even rulebook drills, like start-grid protocol.

From 11am through to 2pm there was a period during which the riders ate lunch, showered, changed and fitted road tyres to their bikes ahead of an afternoon road ride.

Personal responsibility rather than rigid discipline typified the coaches’ approach, something Jack approved of: “I enjoyed the way they ran it. We were given responsibility for our own behaviour. The Danes didn’t turn up one morning. Geoff made it obvious he didn’t approve, but they received no punishment. I think they just felt silly.”

After the lunch break, during which the riders were also encouraged to have a short nap, the afternoon was taken up a group ride of two and a half hours, utilising the wide range of flat and mountainous roads in the area.

Jack noted that this was another opportunity for the innate competitiveness of the riders to come out: “We found it generally split into two groups of ten and we tended to hang onto back of front group and kept with them.”

Local rider Dylan Page led all the rides, with locally-based Swiss under-23 rider Arnaud Grand joining in the fun. Actually, “fun” is perhaps stretching it a little when you consider that one day the group rode a 22km climb with sections of 12% incline, which, with temperatures regularly above 30 degrees, was pretty gruelling.

Between 16.30 and 19.00 there was plenty of time to change again and pick up dinner at the WCC cafe, before a 90 minute evening classroom session. Here Beat and Geoff used video footage of top level races to form the heart of technical discussions which also looked back at the day’s coaching.

Jack explains: “Geoff showed us World Cup Cyclo-Cross videos and used them to analyse top riders. It was great watching the likes of Sven Nys and Bart Wellens, seeing how their techniques held up under the stress and pressure of races. Geoff showed us footage of Sven attacking a hurdle – it was one step before the hurdle and then a massive shove on other side, showing us how it was possible to launch an attack through a hurdle. I’d never seen anyone do one step before.”

A collection of informal video clips from the morning coaching sessions

At the end of the course, Jack was enthusiastic about the experience: “I had expected a lot more formality but it was much more chilled and everyone actually got on really well. It was lots of fun too. I’d say every cross rider should go on something like this. The pit protocol session was particularly good.”

“One thing they really taught me was that we need to know the rules. It’s easy to forget there are rules, but they influence a lot of aspects of racing.”

“Personally, I came away a much better rider of sand, but also improved my bunny-hopping, hurdles technique and just generally riding the 'cross bike.”

“They also opened my eyes a bit by saying that I should generally be doing only perhaps twenty serious races a year. I’m doing a lot more than that, so it made me think a bit. All-in-all, I came away inspired and motivated ready for the cross season.”

Jack was keen to add his thanks to the UCI and to British Cycling for giving him the opportunity to travel to Switzerland and to his sponsors Hope for their support this season.