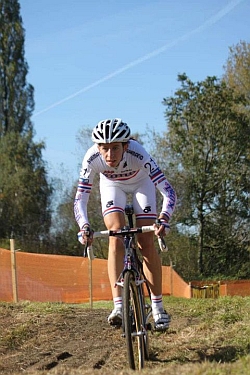 Kona Factory Racing's Helen Wyman had a solid start to the World Cup in Plzen, Czech Republic with a 5th place finish in the opening round.

Having taken the lead at the very beginning of the race, Helen led the race for the first lap and forced a group of five away from the chasers. “I had a great start but the middle of the race wasn’t at the same level. But I’m very happy and confident about where I am right now.” said Helen after the race.

“I started the season in the USA and I used the racing there as a bit of top end training. It’s very difficult when you’re away from home and on unfamiliar roads to stick 100% to your training routine perfectly. The flight home has also taken its toll on me but that’s getting better now. Fair play to all the riders from the USA that come over here and do well straight away. That isn’t easy to do and shows just how good they are.”

This was the 2nd time the women’s World Cup has been to Plzen and Helen has performed well both times. The next round of the World Cup is held in Tabor next weekend and Helen will be based in the Czech Republic for the week. “I’ve done a lot of travelling in the early season and to stay here and train is perfect. I know the training road here are great, with little traffic. By reducing the travelling it will help me keep recovering from my USA trip which I can still feel a little. I’m hoping to be feeling a lot more like myself next weekend and close the gap a little on the group in front.” Commented Helen

Talking about the next round, Helen said “I like the Tabor course and I’ve ridden there a few times. A lot of it depends on the specific course they use and the conditions on the day, but I’m confident I can ride well and give myself a chance to hold my important overall World Cup position. The World Cup has normally had a quite a shake up during the Christmas World Cups and January and I want to make sure I am in the mix come that period. It’s a long way off, but I want to be in with a shout of a decent overall. It’s not something that’s been a focus for me in the past, but I think with the way my season is planned this year I should keep one eye on it.”

“It’s such a long season, and I’ve got my focus 100% on January. I like to perform well all year, but I know I will be looking for one peak this season and I won’t be judging my chances of success in January based on my October performance. Koksijde Worlds is going to be huge and for me it’s a once in a career shot, so I have to put my focus onto it.”