Following the recent sad news that Brian Wright, founder and President of Hillingdon Slipstreamers, has passed away, British Cycling has agreed with Brian's family to coordinate donations in lieu of flowers for the clubs which he so keenly supported. 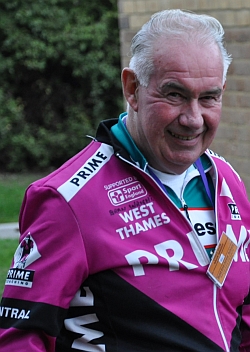 Alongside his work at Hillingdon, Brian was also instrumental in nurturing the skills of young people at Field End Junior School as well as women and girls through Minet Ladies Cycling Club and it is those three clubs which will benefit from any donations made.

Anyone wishing to make a donation can do so by writing a cheque made payable to 'British Cycling' and sending it to: 'Brian Wright Donation', Finance Department, British Cycling, National Cycling Centre, Stuart Street, Manchester, M11 4DQ.

Alternatively, individuals can telephone British Cycling's Finance Department on 0161 274 2050 and make a donation by credit or debit card.

Once collected, the donations will be divided equally between the main cycling groups which Brian supported, to enable them to do something in his memory.

Brian's funeral will take place at 3.15pm on Tuesday 15th May at the Chilterns Crematorium.

Further details on Brian's life and testaments to his impact on the London cycling scene can be seen below.

In 2010, Brian was named the UK Participation Coach of the Year at the UK Coaching Awards in recognition of his impact on the sport of cycling and his tireless work in establishing cycling clubs in and around London.

British Cycling’s Coaching, Education and Development Director John Mills, was present at the awards ceremony in London having nominated Brian for the award.

“Brian’s dedication to cycling was an inspiration and will be a big loss to the growing cycling community he has established through his work with Hillingdon Slipstreamers, Field End Junior School and Minet Ladies cycling clubs.

“His achievements have been nothing short of remarkable and our thoughts go out to his family and all those who had the pleasure of both knowing him and working with him at this sad time.”

As a founder member, Brian was instrumental in establishing the Hillingdon Slipstreamers as one of the leading junior cycling clubs in the country and more recently was heavily involved in nurturing the skills of young people at Field End Junior School as well as women and girls through Minet Ladies Cycling Club.

As vice-chairman at Hillingdon Streamers, John Gunn knew Brian well and paid tribute to his contribution to cycling: “His contribution to all areas of cycling over many years is immeasurable but his passion and enthusiasm for kids cycling has bought so much joy to so many I think this will be his lasting memory.

“Personally I looked to Brian as a great friend and coaching mentor. All the kids at the club loved being coached by Brian and I do not look forward to telling my daughter and all the other Slipstreamers the sad news of his passing away.

“The thoughts and best wishes of the whole of the Slipstreamers club go out to Brian’s wife Jenny and family.”