Fred Wright took a stunning junior omnium gold to end day four of the European Junior and Under-23 Track Championships with a bang.

There were three other medals for the Great Britain Cycling Team in Portugal as they took their tally for the week to 16, still with two more days of competition to come.

Wright finished ninth in the day’s opening scratch race, one lap down on winner Uladzislau Tsimoshyk, of Belarus.

He backed that up with a win in the tempo race to move up to third in the overall standings, and when he took third in the penultimate elimination race he went into points race with just a two point lead over Poland’s Damian Papierski.

Two sprint wins and a lap were enough to seal overall victory with Switzerland’s Alex Vogel 11 points behind the Brit on 123 points and France’s Valentin Tabellion in third.

Wright was boosted in his bid for gold by watching Hayter take silver in the points race just before him, finishing on 76 points as Denmark’s Niklas Larsen rode to victory on 103.

And that was preceded by Lloyd amassing a total of 42 points for bronze in the women’s equivalent, with Germany’s Tatjana Paller winning on 55 and the current senior road world champion Amalie Dideriksen second on 43.

In the junior 500m TT Bate set a blistering time of 35.407s to set a new national record and go into first, but she was pipped to gold by France’s Mathilde Gros and German’s Lea Friedrich, as fellow Brit Georgia Hilleard clocked 36.008s for seventh place.

Earlier in the day Lauren Dolan had been forced to pull out of the junior omnium after the first race, while Ryan Owens and Joe Truman set the fourth and fifth fastest times in qualification for the Under-23 sprint. 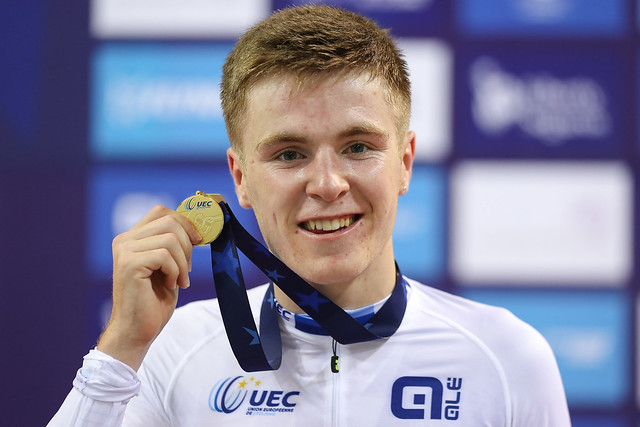