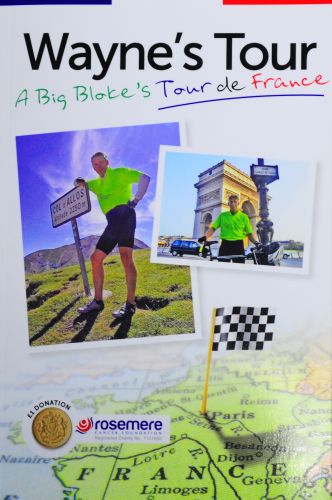 We've got five signed copies of "Wayne's Tour" a new book chronicling one man's personal charity ride round the route of the Tour de Trance, to give away to members.

The book tells the tale of a former policeman, Wayne Howard, and his battle to fulfil what was both a dream and a terrifyingly difficult challenge. Most people drift into retirement with plans to do a little more of what normally fills their leisure time, but Wayne wanted to mark the change in his life in a more meaningful way.

The story is Wayne's own tale, told in his own words and for any cyclist who has decided to up the ante and tackle a new goal, it will have a resonance. The fact that Wayne also chose to use the ride to raise money for a cancer charity adds further piquancy as it's hard not to compare his efforts with those of Lance Armstrong, whose charity work has a similar focus, albeit on a different scale.

And that's probably the most appealing aspect of this book: it's fundamentally the tale of a very normal individual tackling something normally only the preserve of elite athletes, journalists working through career crises or semi-celebrity ego-maniacs.

To win a copy, simply email editor@britishcycling.org.uk with the answer to this question: How many times did Lance Armstrong win the world road race championship? Please include your British Cycling membership number.

Entries close at midnight on 14 February. The lucky winners will be drawn out on 15 February 2012 and notified by email. A full list of winners will be announced on this website.

The book's ISBN number is 978-0-9569532-0-9 and Wayne has more details of how to purchase the book on his website: inspiringexcellence.co.uk