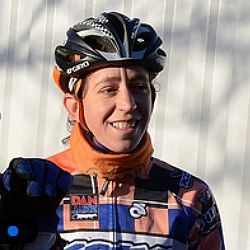 Helen Wyman rates her chances of starting the National Cyclo-Cross Champs at 50/50 at best. The six time winner has been struck down with illness since Christmas and just hasn’t been able to shake it off.

“It’s pretty disappointing but it’s just a case of not being healthy. 8 or 9 day consecutive days off the bike isn’t ideal preparation. If I do start I know I’ll be fresh. I hadn’t targeted the championships and still have all of my focus on being 100% on form for the World Championships at the end of the month.”

“I’m going to travel to the UK and take it from there. I’m proud of holding the jersey for 6 years and it would be a shame to give it up without a fight. Annie Last is on the start list and I think she’s going to mix things up a little. Nobody has mentioned her as a contender, but she’s a classy rider who has proved what she can do at major championships.”

“I’m sure I’ll be able to start the next World Cup and hope I’ll be able to hold a reasonable overall place. I was leading the GVA series when I got ill, now I’m as good as last, so that’s over. The World Cup series is the only series I have any respectable position in now.”