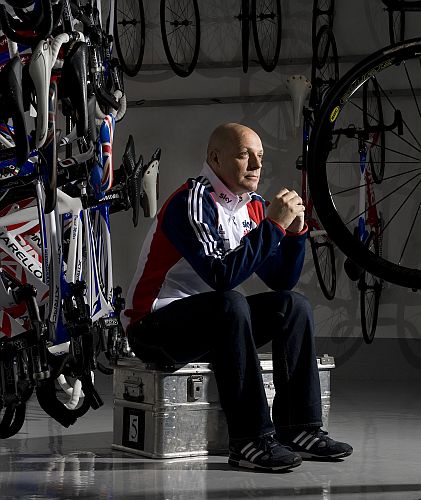 "A home Olympics is something none of us have ever experienced," says Dave Brailsford. "All our previous experience, all the medals, they are great but no one in the team has got experience of competing in an Olympic Games on home soil. We talk about that quite a lot. Let's not take anything for granted because this won't happen again in our lifetimes."

British Cycling's performance director is warming to the theme. The London Olympics are now 12 months away. In terms of the four-year cycle that spans from Beijing, he's just rounding the final bend and is about to enter the finishing straight. London is no longer looming on the horizon, it is rushing towards him. But he's ready.

"It does feel like we're within touching distance now. It's the final push, which is always exciting. With a year to go, we're well placed and optimistic. Across the board, across all the medals, we're preparing well."

Although Brailsford and his head coach and confidant, Shane Sutton, spent most of July at the Tour de France, the Olympics were never far from their thoughts. "The key thing is to be able to compartmentalise," Brailsford says. "It's not a surprise to the coaches that Shane and I were at the Tour. All the staff knew that if they needed something, we'd be on it. We'd planned the whole year around us being at the Tour in July. In past years, before Team Sky, I'd have been at the Tour anyway. For Geraint Thomas, Ben Swift and Bradley Wiggins, before he crashed out, the Tour is part of their overall build-up. In previous years, they'd have been in three different teams but now they're in-house and we're working with them on a daily basis, making sure they have everything they need."

The road, BMX and mountain bikers are in the middle of the season, while the track sprinters are just starting their build-up. Everything is moving forward, constantly changing. Brailsford is almost obsessive about keeping tabs on progress. With Olympic qualification at stake, he has to be. "We're well on that, all over it," he says. "I've got a big chart on the wall in the office and we have bi-weekly meetings. The coaches work on the qualification process to the nth degree. My role is to support them.

"I've got a piece of software we call a ‘medal tracker'. It's quite a complicated spreadsheet that I got some IT guys to build for me. We have a medal plan for each event. The first question is whether a medal is attainable. Then we have a strategy to get the medal and under that each individual rider has his or her own plan.

"Every medal and every individual's programme is planned, phase by phase. Each phase has a KPI [key performance indicator], which might be that we're hoping to hit a peak power of x."

Brailsford keeps track with a traffic light system, green if everything is going to plan, amber if there's a niggling concern, red if there's a problem that needs to be addressed urgently. "If anything goes to amber or red, I want to know about it and get in there," he says.

But even the most meticulous plans can be derailed, as Brailsford found at the Tour. Wiggins crashed and broke his collarbone during stage seven. "Bradley was in the shape of his life. That's not talk, we have the numbers to back it up. We were convinced he could do a great Tour and then it was over in a moment. When something you've planned for, something you've put so much into, is taken away like that, it's almost like a grieving process. Setbacks are a fact of life in elite sport, it's how you cope with them that is important. But we know that there is never room for complacency here. You never know what might happen."

The emergence of young riders such as Laura Trott, Dani King and Sam Harrison is something that continues to excite Brailsford. "It's one of the best things about every Olympic cycle," he says. "You get young riders coming through and you see them develop. That women's team pursuit squad has got some great depth in it and that is exciting.

"Even though we're getting close, there's still time for a young rider to break through. Liam Phillips is making really good progress in the team sprint. A year ago he was riding BMX and was not really cracking it, as a team sprinter he's definitely worth persevering with and we'll see how he progresses.

"The window is getting narrower and narrower but there's still time for people to force their way in."

Steven Burke's surge from nowhere to Olympic bronze medallist in Beijing should be an inspiration to any rider who's currently on the fringes, and a warning to the established names that reputations will count for little. There are no sacred cows. "No, no, no," Brailsford says, almost scoffing at the idea. "Absolutely not. Even I'm not. There will be some tough decisions but the team will be picked on merit, not reputation. If you do it any other way, it's a recipe for disaster. You have to pick the best, whoever they are. I think we're pretty good at that. We take the emotion out of it and every decision is taken from a performance point of view.

"When Steve Peters came in, one of the first thing he explained was that athletes want to know how they are going to be selected. They are constantly asking questions about how the team will be picked and if you don't tell them, they will not settle.

"With the team sprinters, with such a narrow margin between performance, we always had this problem so we threw it to the riders and said ‘Okay, you come up with the criteria'. And they couldn't do it so they gave it back to us. They understand how we pick the team - we select the fastest combination - and they may not like the idea of being left out but they accept it.

"Riders need to know where they stand, so we tell them, we don't keep that from them because it doesn't help anyone. If you put the list up on the board and say to someone ‘Look, you're tenth out of ten', they won't like it but they will settle down and fight to get to number nine, then number eight."

Selection issues will intensify as the months go on. Aside from the team sprint conundrum, there's the task of trying to balance the need for a team pursuit squad capable of holding off the Australian challenge, with the need to provide support for Mark Cavendish in the road race. Geraint Thomas, a world-class pursuiter and lead-out man, could do both jobs but it's likely Brailsford and the coaches will have to make a choice because it would be hard to ride a team pursuit campaign straight off the back of a road race. "I think it's very unlikely he will do both. It's possible, everything's possible, but would picking him help us win medals in both?" says Brailsford.

For now, supporting the coaches, and particularly Shane Sutton, is Brailsford's priority. "I need to make sure Shane is in a good place. His input is vital. I don't think there's anyone in the world better than him at what he does. He has that X-Factor and I can't do what he does. I don't think anyone can."

It is interesting that three of the athletes Sutton is closest to are the modern giants, those with big reputations and armfuls of Olympic and world championship medals, Sir Chris Hoy, Victoria Pendleton and Wiggins.

Brailsford cuts in. "That's not a coincidence, not at all. He is brilliant with riders like that. He knows how to make them feel good while always being honest. Shane will pull people up straight away. He won't let them get away with anything and they like that. Some people are more concerned with not upsetting the famous athletes."

The fact the Games are in London heightens the anticipation but Brailsford says he does not feel more pressure, despite the fact he will be one of the most scrutinised figures in Team GB. "Let's not worry about it, let's see it as an inspiration," he says. "If we do our best, win or lose, the British fans will support us for ever more. They are magnificent and we should feed off that. This is a great opportunity, not a time to be hesitant."

Lionel Birnie has covered cycling since 1998. He writes for Cycle Sport, Cycling Weekly and The Sunday Times.