British Cycling’s ambition to get one million more women cycling by 2020 is ‘on track’ the sports governing body said today as it published a six month update on its women’s strategy, announcing that around 106,000 women have participated in the sport governing body’s programmes so far this year. 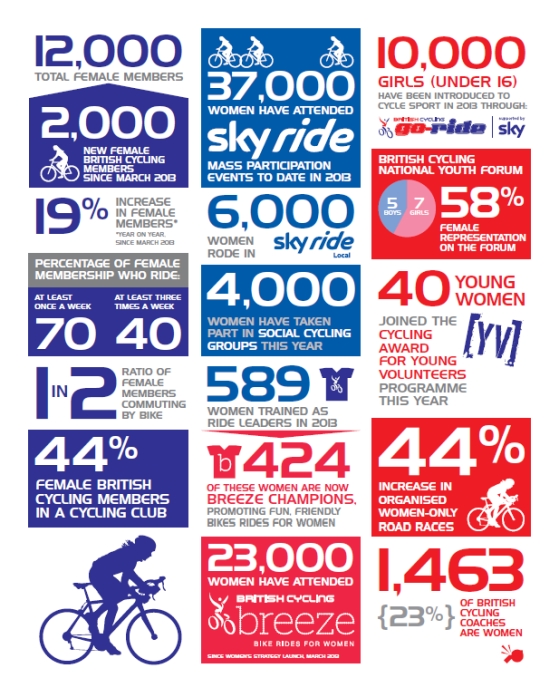 “In the six months since we launched our strategy we’ve made some great progress and our plan to get one million more women cycling over the next seven years is firmly on track. We’ve got some fantastic headline figures that we’re announcing today. They show that there are thousands of women who want to ride recreationally – a big win for our partnership with Sky, especially the fact that over a third of the 100,000 women we’ve engaged so far this year was through Sky Ride. There is also a real appetite for women to get into racing or to try personal challenge rides. 24,000 women have taken part in British Cycling sportives so far this year and our female member base has increased by 19% since we launched our strategy.

“The introduction of the Women’s Tour from next year can only build momentum further. We know that British Cycling has a long journey ahead to change the culture of our sport but we are heading in the right direction.”

"We know that British Cycling has a long journey ahead to change the culture of our sport but we are heading in the right direction."

“It’s fantastic that British Cycling’s women’s strategy has got off to a flying start. The approach to promote both recreational cycling as well as sportives to women is clearly paying off. With great role models such as Laura Trott and Becky James, an increase in women’s races, a Women’s Tour announced and more female coaches coming through, the sport is in a great position to keep up this momentum.”

“For too long cycling has been seen as a sport for men. It’s fantastic to hear that over a 100,000 women have dusted off their bikes and got involved in British Cycling programmes across all disciplines so far this year. The more women that cycle, the more their friends, sisters and mums will be inspired to give it a try – we’re starting to close that gender gap and I look forward to seeing even more women enjoy all that cycling has to offer.”

Since British Cycling launched its women’s strategy in London alongside Culture Secretary Maria Miller, progress has been made in all areas of the plan. The key headline results for British Cycling’s 2013 programmes so far include:

"This is great news. It's further evidence that Sky's partnership with British Cycling is helping to get more women out on their bikes."

"This is great news. It's further evidence that Sky's partnership with British Cycling is helping to get more women out on their bikes. Our Sky Ride events create an environment where families and friends can cycle together on traffic-free routes and build up their confidence on guided rides. And the sustained success at elite level is creating new role models and inspiring even more people to get involved."

“It is good to see British Cycling have set an ambitious target of getting one million more women cycling by 2020. Whilst the gender gap between men and women playing sport is beginning to narrow, much more needs to be done, and the profile of cycling means they are well placed to make a real difference."

“From getting more women to try recreational rides with their families to training more female coaches to specialise in mountain biking, we are busy putting in place changes that will make getting into cycling a more attractive offer to all women, however they want to ride. The best thing about our sport is its versatility – whether it’s riding to work or racing in a regional competition – anyone can do it and there has never been a better time to ensure that cycling is a modern sport with modern values.”

In terms of changing the structure and broadening appeal of cycling, British Cycling has taken steps to:

British Cycling is measuring progress towards the one million target using research from British Cycling and Sky’s Annual Cycling Survey. Sport England’s Active People survey will be taken into account but, as that survey only measures recreational cycling in England, it won’t provide the full picture. The results will be assessed twice a year with the first tranche expected by the end of 2013.

In March, British Cycling identified seven key areas for improvement against its plans to get one million more women cycling. Read more detail about how British Cycling is doing against each of these areas here.