Former British Cycling President and women’s cycling pioneer Eileen Gray CBE will become one of the oldest Olympic torch bearers on the route as she carries the torch through Kingston upon Thames today. 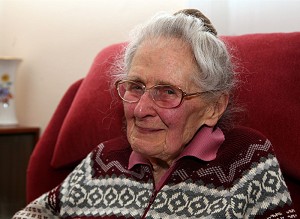 Gray, aged 92, is a true champion of women’s cycling. Born in Bermondsey in 1920 before moving to Dulwich, near Herne Hill Velodrome, Eileen worked as an engineer throughout WWII, commuting to work by bike through the bomb-damaged streets to escape the wrath of her supervisor, as she explained to British Cycling in an interview in 2010.

"I rode that old bike to work. The way I looked at it, anything that happened then was down to me and me alone," said Eileen. "So I rode to Harrow Road and back everyday – round the rubble and the potholes, through all weathers, night and day, but I was never late again, and he never had another opportunity to tell me off.”

Following the war, Gray joined Apollo Cycling Club, one of the only local clubs that would accept women and her talent led her to compete in the first international women’s team, in an exhibition event in Copenhagen in 1946.

"It sounds daft now, but being allowed was a big thing", said Eileen in 2010. "People today would laugh at even the suggestion that permission had to be given by half of society to the other half to do something that they did as part of everyday life, but that’s the way it was back then."

Gray went on to found the Women’s Cycle Racing Association, where she remained president for 13 years before becoming President of the British Cycling Federation in 1976. Gray’s pioneering work for women’s cycling continued, helping to secure women’s cycling as an Olympic sport in 1984.

In 2009, Eileen was among the initial 50 names inducted into the British Cycling Hall of Fame, in recognition of a lifetime’s work in cycling.

Upon hearing of Eileen’s selection as a torchbearer, current British Cycling President and fellow torchbearer Brian Cookson OBE said, “I am delighted to see our former President Eileen honoured in this way. Eileen's contribution to our sport has been immense - amongst many other things, she is probably the main reason why women's cycling was admitted to the Olympic programme back in 1984.

“She was made a member of British Cycling's inaugural Hall of Fame in 2009, and even then was the star of the show. It's great to see her today in this role and I know she will love seeing the Olympic Games come to her home city.”

British Cycling can today provide an update on the current suspension of sanctioned cycling activity, which was due to run until 30 June 2020.