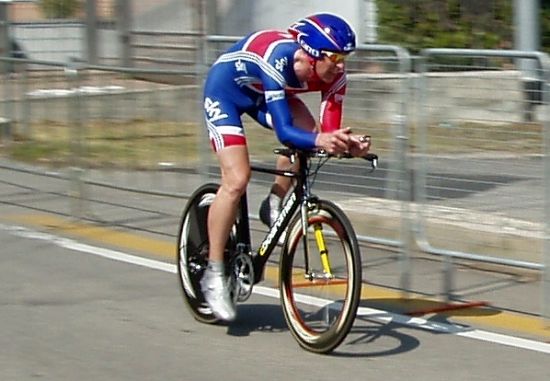 Richardson, 45 of Porthcawl, South Wales won two golds and one silver medal at the Beijing Paralympics in 2008 and was training for London 2012 selection when he was hit by a van driven by Adams near his home on August 17 2011.

Richardson was airlifted to hospital and treated for multiple injuries, which included a broken sternum, punctured lung, broken pelvis and injuries to the upper vertebrae, the latter compounding injuries the Paralympic champion had sustained years before.

Richardson was placed in a medically induced coma while his condition was stabilised and was eventually released from hospital just 25 days after being admitted – testimony to the condition he was in at the time of the incident.

British Cycling caught up with Richardson shortly after the Crown Court hearing on 20 February to get an update on his condition and to get his response to Adams’ plea.

Speaking to the Press Association back in December 2011, Richardson said that he was wearing a body brace to stabilise his back injury. A few months on and Richardson reports that his brace was removed in January, in order that his doctors could assess how much the device was keeping his back upright.

“I’m going back to see my back specialist on Thursday to see if they’re going to operate or not because of the problems I’m having”, revealed the rider. “I broke T9 and T10 vertebrae, which are above the metalwork I already had. So that is actually bending over and causing the scoliosis.

“The problem is it’s too close to my previous metalwork. So the doctors think they’re going to have to take the previous metalwork out first and redo all of it. There’s a lot of trauma on the body to get it done.”

Since speaking to Richardson earlier in the week, the rider's back specialist has now confirmed that no further surgery is required at this stage and the break is currently stable. Good news for Richardson, as further surgery would have hampered Simon’s goal of returning to racing in 2013. “I’ve got a team (Team Onyx) ready to go as soon as I’m ready to go. I intend to race in 2013 if everything goes OK and just get general fitness back this year,” said Simon, who has a brand new Onyx frame next to his Wattbike, which the rider uses every day to begin to rebuild fitness and mobility. “I’m walking to a degree”, said the Paralympic champion. “However, I’m using sticks more than I was before whenever I go out of the house.”

The accident punctured Richardson’s lung which, compounded by his back injuries, continues to cause breathing difficulties to this day. “The blood clot has gone but they’re keeping me on Warfarin until the end of March to make sure everything’s clear,” said Simon. “My doctor is quite happy with the lungs at the moment – obviously they’re not perfect but for the amount of trauma I’ve been through, they’re in good shape. I’ve got to go in for VO2 Max testing in the hospital to see how things are progressing.”

However, Richardson is on a steady course of physiotherapy to regain strength despite being in chronic pain. “I go to physio once a week for my back – they some work on me there and give me exercises to do at home”, revealed the rider. “My biggest problem is that I can’t take pain killers so the only thing that helps with the pain is acupuncture.”

Richardson attended Edward Adam’s hearing in Cardiff Crown Court, which was also extensively covered by BBC Wales. “It was all over the news, which was good," said Richardson. "The driver pleaded guilty to drink driving, guilty to leaving the scene and not guilty to dangerous driving.

“There’s a clause in the law that says just because you’re drink driving doesn’t mean that it’s dangerous driving, it could be ‘careless driving”, explained Richardson; “It’s borderline between to two, that’s all. It’s going to down to a jury to decide anyway, unless he changes his plea.”

Simon and his wife Amanda would like to take this opportunity to thank everyone who has shown their support since the incident.

Driver Edward Adams is due to appear on May 17 in Cardiff Crown Court. British Cycling and Leigh Day and Co solicitors continue to support Simon and his family and British Cycling will keep members informed on Simon’s case, his rehabilitation and the organisation’s ongoing work on driver sentencing.

Understandably and inevitably, the ongoing global uncertainty around the pandemic has led to plenty of questions and concerns.